Arts and Crafts for Adults 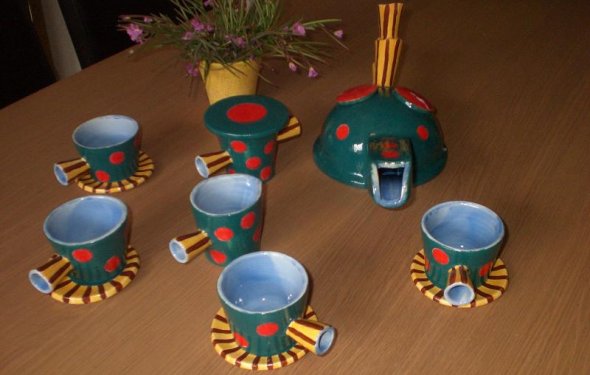 Just as coloring books for adults are starting to fly off the shelves, a new study suggests that older adults who do creative activities like arts and crafts could delay the development of memory problems in old age.

The study, which is published in the journal Neurology, looked at 256 people who were between 85 to 89 years old and did not have any memory related problems at the start of the study. The men and women were followed for four years. The people in the study reported their levels of engagement in the arts, including painting, drawing, sculpting, woodworking, ceramics, quilting and sewing. They also estimated their social life—hanging out with friends, traveling, and attending book clubs and Bible studies—as well as their computer use, which included searching the Internet and buying things online.

The researchers also found that other risk factors, like having high blood pressure and depression in middle age, also increased the risk of mild cognitive impairment later in life.

Education may increase the mind’s resilience, which can keep memory loss symptoms at bay, the researchers say. “The reduced risk with computer use and with artistic or crafts activities suggest that these activities should be promoted throughout life, ” the authors write. “These activities may also increase cognitive reserve, maintain neuronal function, stimulate neural growth, and recruit alternate neural pathways to maintain cognitive function.”

Kids are encouraged to express their creativity, but arts and crafts may stimulate the minds of adults, too. “There have been a number of studies both in older and somewhat younger individuals suggesting that physical but also mental activity may help prevent development of dementia, ” says Dr. James Leverenz, director of the Cleveland Center for Brain Health at the Cleveland Clinic. (Leverenz was not involved in the research.) “We know [mental activity] doesn’t harm anyone, so I encourage it, ” he says. “Sometimes that’s just getting out and being social and not sitting around the house all day.”

According to Leverenz, some science suggests that having the brain being stimulated both socially and physically increases growth factors that are important for brain health. At the same time, Leverenz says that the group of adults analyzed in the study was fairly unique since they had no memory problems at their old age. It also should be noted that cause and effect could not be determined in the study. “One of the earliest symptoms of the disease is a loss of interest in activities, ” says Leverenz. “It might be that it’s not the loss of activities that cause them to transition, but actually it’s the very early stages of the disease that cause them to be less active.”

Occupational therapy assistants and therapist often use arts and crafts to help patients develop dexterity. Otherwise, I can only think of Art Therapy.

Related Posts
Categories
Latest Stories
Cheap and Easy Christmas gifts Almost every teacher wants to buy a Christmas gift for each one of their...
Homemade gifts for adults Nothing says luxury and self-pampering quite like a nourishing body oil...
Quick sewing Projects for Kids Kids everywhere discovering the wonder and joy found in simple needle and...
Creative Homemade gift ideas for men Grandmas are wonderful, special people. So why get them an ordinary present...
Handmade Crafts ideas There are currently no images from other crafters. Terms & Conditions...
Christmas Arts and Crafts for Adults Aliexpress.com : Buy Free shipping HD wallpaper poster, christmas
Interesting facts

The Maryland Hall for the Creative Arts is a multi-disciplinary arts center in Annapolis, Maryland which offers opportunities in the arts for individuals of all ages, skill levels and backgrounds. It was founded in 1979 to promote art appreciation and education in Maryland.
Maryland Hall offers year-round arts classes for children, teens and...

HobbyCraft is the registered trademark of HobbyCraft Group Ltd., an arts and crafts superstore chain.
It is the largest chain of craft superstores in the United Kingdom, and the first of its kind in Europe. Craft shops are traditionally small and based on specific crafts, whereas HobbyCraft stocks material for several different crafts. It was...