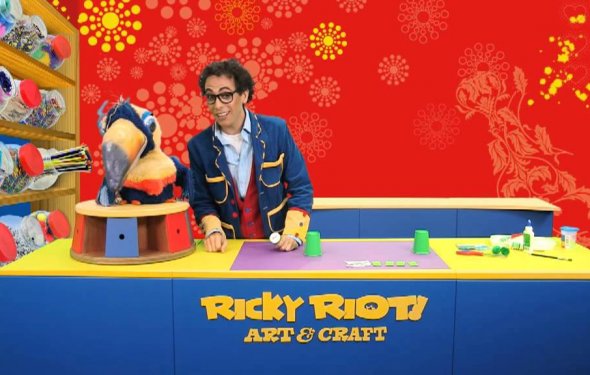 Kate, Jenna and I turned up on the day itself to support their efforts

as well as the efforts of the other kid-vendors. Kate and Jenna went shopping!

Emily and her friend Rena each picked a craft product to sell, then got together to make them together. Rena's idea was the barrettes in the picture above that Jenna is browsing (and buying). Emily wanted to make a gender-neutral toy. She looked through her collection of craft books and found something in this library cast-off:

In the process of making them, Emily learned that one must sometimes adapt the given instructions in order to ensure the workability of a design, or risk utter frustration. Here follows Emily's tutorial, with all the resultant fine-tuning.

To make one car, you need

Thread one twist tie through a pair of buttons and a straw bit, as shown in the series of photos below.

Keep the twist tie relatively loose until both buttons are secured. Then rotate the buttons in opposite directions to tighten the ensemble. Be sure to ensure the twisted twist tie can still freely move inside the straw and that the buttons do not touch the ends of the straw.

Here are the cars made by Emily and Rena.

End of story. Except Emily also decided she needed a ramp for display purposes and to enhance the presentation at her table. So we brainstormed and she sketched this race car track.

Took about a half hour.

Very easy. It's a long piece of cardboard, whose sides are folded up to create walls. Another long bit of cardboard was glued on its side to make a middle partition. There's also a back wall made with a broad rectangle of cardboard that wraps around the walls of the track to create a backstop as well to keep the walls upright.

That end bit was also useful for supporting the Start banner

and we taped on a run-off area that supports the Finish line banner.

ooh I remember that... was it on nickelodeon? Not a whole show, but just a short segment between commercials?

Related Posts
Categories
Latest Stories
Cheap and Easy Christmas gifts Almost every teacher wants to buy a Christmas gift for each one of their...
Homemade gifts for adults Nothing says luxury and self-pampering quite like a nourishing body oil...
Quick sewing Projects for Kids Kids everywhere discovering the wonder and joy found in simple needle and...
Creative Homemade gift ideas for men Grandmas are wonderful, special people. So why get them an ordinary present...
Handmade Crafts ideas There are currently no images from other crafters. Terms & Conditions...
Christmas Arts and Crafts for Adults Aliexpress.com : Buy Free shipping HD wallpaper poster, christmas
Interesting facts

Reality Check was a 1995 television show about Jack Craft, a man who is stuck in a computer mainframe. The two Bonner kids (Samantha and Nicholas) try to get Jack Craft out of the mainframe. Another character on this show is Isis. The computer was activated on September 17, 199?.
The show was broadcast under syndication with each episode...

All for Kids is a half-hour pre-school television series produced by Media Farm, commissioned by the Seven Network with Southern Star Group responsible for the international distribution on Series 1. The second series of All For Kids is being distributed by Talefinn Entertainment and Media Farm.
The first episode was broadcast on the Seven...